Art covers a range of expressions – some of it is cheerful, positive, and colorful art, while some of it is depressing, gloomy, and sad art. Emotional artworks can convey something about the artist’s inner experience or perhaps the way they view the world around them. Sad artworks act as a medium of expression, a way to portray a message, or a means of getting a political stance across. Today, we will explore the most famous sad paintings that have left their mark on society through the ages.

Artists are rather emotional beings. It is no surprise then that so many of them produce sad artworks at some point or another in their career. For many, creating emotional artwork acts as a release mechanism, allowing them to let go of feelings inside by expressing them through their art. Here is our list of famous sad paintings, and why they were so well-renowned.

Aertgen van Leyden was a brilliant Dutch painter who was prolific in the 16th century. Many of his paintings were based on Christianity and featured some of the most renowned religious people of the day. St. Jerome in his Study by Candlelight is one of Van Leyden’s most famous works.

This painting, which represents the famed St. Jerome reading a book, is said to have been produced around the 1520s. St Jerome in his Study by Candlelight (1520) by Aertgen Van Leyden, located in the Rijksmuseum in Amsterdam, Netherlands; Attributed to Aertgen van Leyden, Public domain, via Wikimedia Commons

This book is thought to show Jerome’s renowned translation of the Scriptures from Greek to Latin. Throughout the artwork, several motifs represent various Christian symbols and ideas. Van Leyden also inserted several minor inscriptions and other types of symbolism that were important to the Catholic Church during St. Jerome’s lifetime.

Louis-Jean-François Lagrenée was a well-known artist of the Rococo era, a brief but prominent art trend. The artist was a genius at capturing the human figure, and he did it in classic Rococo style, depicting scenes in intricate detail. La Mélancolie is one of Lagrenée’s most basic, yet intriguing artworks.

This intricate work is regarded as one of the most famous sad paintings from the 18th century. 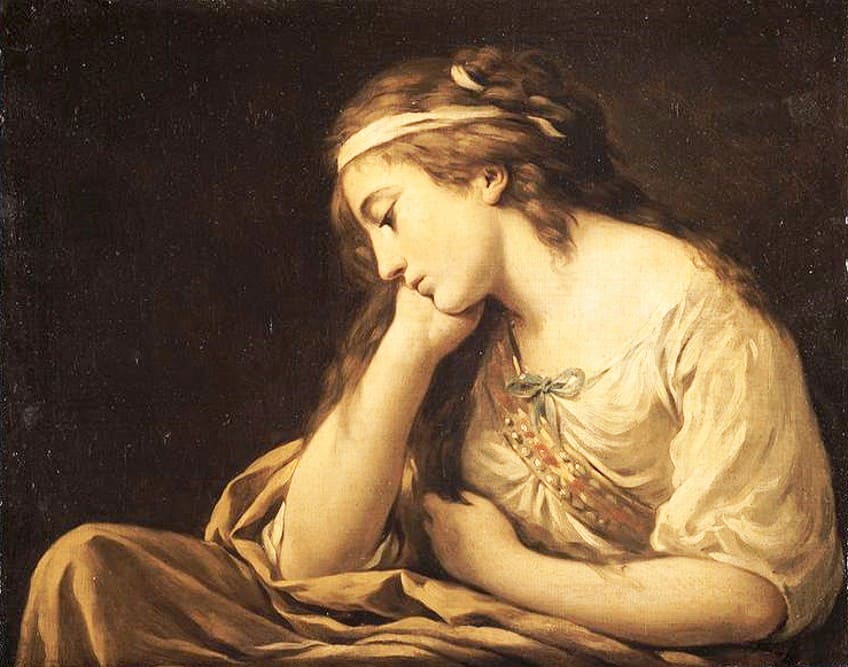 The image portrays a young woman draped in flowing robes and wearing numerous pieces of jewelry, yet her face is frozen with a melancholy expression. Her look is one of the most unforgettable in any of these emotional artworks since it appears to encompass the solemnity that frequently accompanies severe melancholy.

Few people are thought to have had as much effect on the late post-Impressionists as the artist Paul Cézanne. Some of his most famous compositions deal with religious themes based on New Testament biblical tales. One of these emotional artworks depicts the well-known image of Mary Magdalene.

This artwork is said to have been finished in 1867. In 1860, Paul Cézanne’s father purchased a home in a tiny French village. 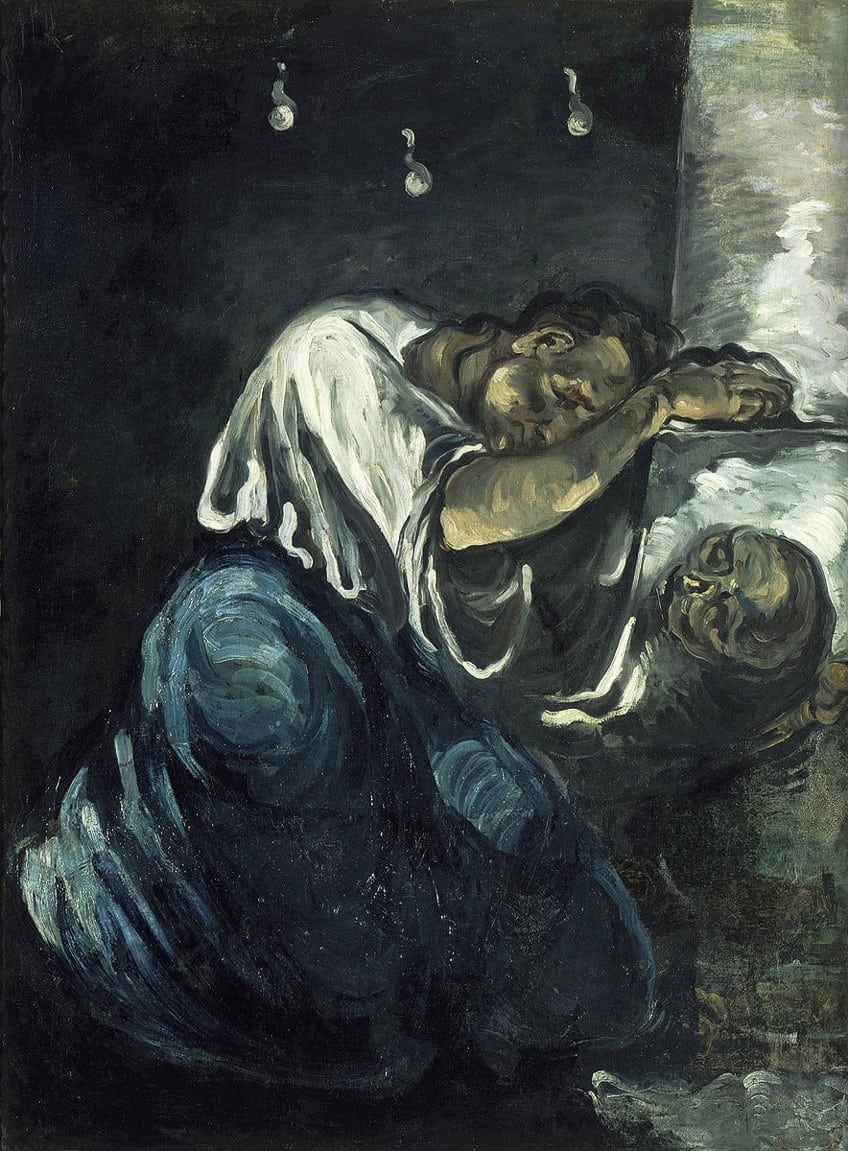 He let his little son paint many pieces, which he later displayed on the walls of the villa. The artwork is claimed to depict the suffering and grief of Mary Magdalene, who was one of Jesus’ closest supporters soon before his crucifixion.

Absinthe was considered a fashionable beverage in Europe through the latter half of the 19th century. It is an unusual type of alcoholic mixture that frequently causes individuals who drink it to become apathetic towards themselves as well as those around them. Edgar Degas was most probably all too aware of the effects of absinthe from both a cultural and personal point of view.

This artwork portrays a scene that was most likely common in numerous social gatherings around France and other regions of Europe. 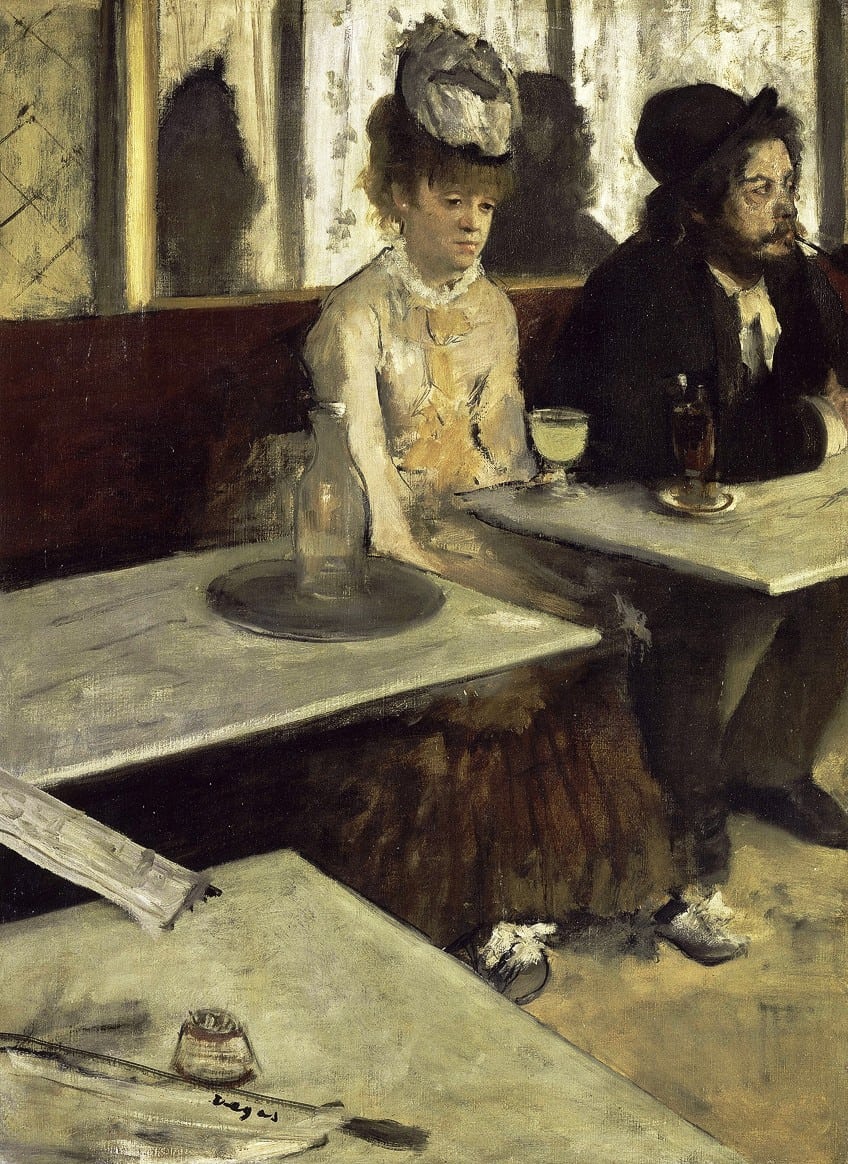 The woman in the painting is sporting a hat as well as exquisite clothing, both of which were fashionable in Paris and other parts of France at the time. Her static expression seems to depict an unwavering sense of despair or sorrow, most probably brought on by absinthe intoxication.

Vincent van Gogh was a painter who had personally experienced much misery and melancholy. He had been troubled with numerous mental illnesses throughout much of his adult life, which had been badly handled by doctors and therapists during his life. He is undoubtedly an artist who has a profound knowledge of the melancholy expressed in these works.

This artwork was regarded as one of Vincent van Gogh’s most famous sad paintings on the theme of grief. This picture, like many of his other paintings, has the distinctive and magnificent fluid brush strokes that were characteristic of Van Gogh’s technique. The picture shows an old gentleman seated in a chair while holding his face in his hands. He seems to be in tears as he realizes his life is coming to an end.

This picture most likely represents many of the same emotional and mental challenges van Gogh was going through at the time, as it was finished only two months before his suicide.

A miserable affair with a young woman from Munch’s hometown in Norway is claimed to have inspired his work. Munch appears to be peering off into the distance along a seashore in the artwork. The beach depicted in this artwork is believed to match Asgardstrand’s beach, a favorite location for Norwegian families.

Certain art experts and historians have speculated that the artist incorporated some intriguing imagery inside the water’s reflection that correspond to his despair at the time. In truth, we are shown two images: first, an imaginative but objective perspective of a gloomy individual, and second, a blurry vision of the place his mind stirs up as an analogy for the source of his melancholy. Such dual pictures, which necessitate a transfer from our vision to the mind’s eye of a principal character, are typical in Munch’s work.

Picasso produced works of poverty and sadness while residing in Barcelona in 1902, as a consequence of being devastated by a close friend’s death in Paris and plagued by the memories of prostitutes in the women’s jail of St. Lazare, which he depicted.

This era of depressed, sad paintings lasted for years and was eventually dubbed Picasso’s Blue Period. For symbolists of the period, the hue blue conjured up images of gloom, darkness, and death.

This artwork most likely depicts the mistress of Picasso’s deceased friend, a woman the artist was fascinated by. The lady is depicted as an inmate, mournfully looking at the walls of her prison, emotionally stunted. Picasso’s previous experiences inspired his artwork, as demonstrated by this depiction of her.

However, there is much more meaning in this artwork: she is a hostage of her own feelings; her own sadness.

The Old Guitarist (1903) by Pablo Picasso

The artwork, produced in 1903, is widely regarded as one of the most acclaimed works from the early 20th century. The picture portrays an elderly, feeble man with a gaunt visage clutching an antique, old guitar. Picasso’s close friend, Carlos Casagemas, killed himself shortly before this work following a failed romance.

Picasso is claimed to have fallen into severe despair and sadness, resulting in a period of hardship for the painter who had yet to achieve the acclaim he is so commonly associated with.

After living with the destitute beggars during this period, Picasso is supposed to have established common ground with them. Through this sad artwork, he attempted to depict the hardships of these impoverished people, who were frequently sufferers of despair and sadness.

Anna Christina Olson was a lifetime inhabitant of Cushing, and this sad artwork depicts the farm where she resided. By the late 1920s, she had a deteriorating muscle condition that had rendered her unable to walk. She crawled about the home and grounds instead of using a wheelchair. Wyeth, who had spent several summers in Maine, met the unmarried Olson in 1939. Betsy James, Wyeth’s future wife, introduced the two.

It’s difficult to determine which piqued the young artist’s interest more: the Olson girl or her home.

Christina features in a number of the artist’s works. The artist was intrigued by the girl’s condition and felt compelled to convey the solitude she experienced while residing in a scarcely populated countryside during what should be the most active years of her life.

The image depicts a lone woman looking into a coffee cup in a nighttime automat. Through the window blackened by the night, the reflections of matching rows of light fittings extend outward. The female was modeled after Hopper’s wife, Jo. Hopper, though, changed her appearance to look younger. He also changed her form; Jo was a voluptuous, full-figured lady, but the woman in the picture has been characterized as “boyish” by one reviewer.

Both the woman’s situation and her attitude are unclear, as is often the case with Hopper’s works. She has only taken off one of her gloves, which might indicate that she is thinking deeply about something, occupied by her thoughts, or maybe she is in a hurry, and can only remain for a minute, or she has just stepped in from the cold. However, the second alternative is doubtful, as there is a little empty dish on the tabletop next to her cup, indicating that she may have consumed a meal and been seated there for some time.

That just about concludes our look at the most famous sad paintings from the history of art. Sad art is a significant aspect of the art world as it depicts the side of reality that most people would rather ignore. However, through the creation of sad paintings, artists are able to express their own, as well as others, sorrows, and experiences. Hopefully, by doing so, they are able to make others feel a little less lonely and misunderstood. Therefore, emotional artworks play multiple roles, allowing the artist to express their pain, and the viewer to reflect their own.

Why Do Artists Create Sad Artwork?

Artists create sad art for the same reason they create happy art – to act as a medium of self-expression. Humans are not always happy, and art should reflect that. Although, some people might feel that art is escapism and therefore should reflect an idealized world. However, by creating realistic and sometimes painful artworks, artists can share how they feel about the world, and by doing so, they can raise awareness of a certain plight or situation.

Are There Benefits to Sad Artworks?

The same question can be asked of music – is there a place for sad music? Ironically, sometimes listening to sad music can make one feel better, as the act of expression serves as an emotional release as well. In the same way, art can help people release something by exposing themselves to material that triggers an emotional response. It is, however, important that the viewer is prepared for the experience, or else it could be traumatizing. Art is often used as a therapy for expression and release. 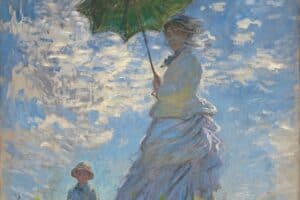 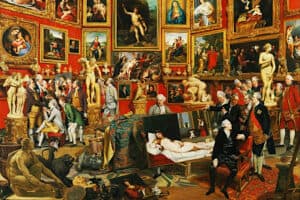 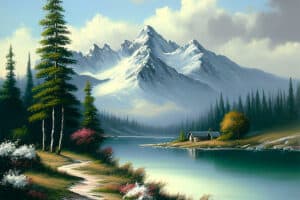